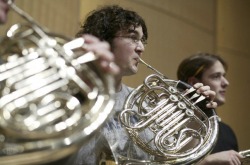 Sean A. Brown currently resides on Whidbey Island in western Washington as a freelance hornist, teacher and composer. He has an active studio of 35 students (and counting), and teaches and plays all brass instruments proficiently. He is the founder of the Harbor Brass Choir & Penn Cove Brass Ensemble, which are tuition-based student brass ensembles for middle-school & high-school musicians, respectively. He also is the founder of the Whidbey Island Horn Club, a volunteer group of hornists that play together and to perform for the community. In addition, Brown is an active performer when opportunities arise, as he is the principal hornist of the Saratoga Orchestra of Whidbey Island.

Brown is also an active composer and arranging. He arranges music for his own ensembles: the Harbor Brass, Penn Cove Brass and Whidbey Island Horn Club, and participates in composition contests. He has a number of original compositions for various ensembles, and is always working on new compositions.

Brown grew up on Whidbey Island. He began musical training at age 10 with enrollment in school band, beginning on tenor sax. At age 13 he decided he wanted to be an orchestral player, so he began playing clarinet, bass clarinet & oboe. He began playing horn at age 16, which became his primary instrument in months. He also joined the Fidalgo & Mt. Baker Youth Symphonies as principal horn. At age 17 he learned trombone, euphonium & tuba, and placed 3rd at Washington State's Solo & Ensemble contest on horn, after playing the instrument for a year and a half. He graduated from Coupeville High School in 2004 and began attending Central Washington University.

Brown received his Bachelor's Degree in Horn Performance from Central Washington University in 2010, studying horn with Jeff Snedeker, Wind Band with Larry Gookin, Orchestra with Nik Caoile, and Brass Pedagogy with Mark Babbitt. He played in the CWU Orchestra, Chamber Orchestra, Wind Ensemble, Brass Choir, Peacock 5 Brass Quintet, and Horn Ensemble during his time there. He attended several workshops with the CWU horn studio, and played in masterclasses taught by William Purvis, Mark Robbins, Randy Gardiner, and Greg Roosa. He composed 14 works while at CWU, and 12 of them were performed. He was active as a performer outside of CWU, becoming principal horn of the Mid-Columbia Symphony in 2009, and subbing regularly for the Yakima Symphony and the Wenatchee Valley Symphony.

He received his Master's Degree from the University of Wisconsin-Milwaukee in 2014, studying horn with Greg Flint, Wind Band Conducting with John Climer, Orchestra with Jun Kim, and Chamber Music with Kevin Hartmann & Ted Soluri. Many of his exisiting compositions we performed while attending. He was active outside of the college, becoming the principal hornist of the The Festival City Symphony in 2014 (subbing since 2013), and frequently performing with the Wisconsin Wind Orchestra, including playing as their 2nd hornist for a tour of Italy in August of 2015. Brown has also played with the Milwaukee Symphony Orchestra as a substitute.

In addition to being a free-lance musician, Brown is a stay-at-home father of his three young sons, Luke, Logan & Levi. His wife, Holly is the Elementary Music Teacher at Broad View Elementary in Oak Harbor, and is also a horn player.

List of Works by Instrumentation
Clicking on a title will take you to its product page, which has a recording (if available)

Chamber Winds
Serenade for Winds No. 1 in F Major